As researchers learn more about the molecular diversity of tumors, it’s becoming clear that cancer therapies must be tailored to molecularly defined subsets of tumors. As such, in many cases, clinical trial design is being adapted to the needs of molecular targeted therapies – including at Children’s Mercy Kansas City.

At the Children’s Research Institute, led by Tom Curran, PhD, FRS, Executive Director, researchers are working to identify hematology and oncology targets, drugs and treatments. Teams are conducting investigator-led research that leads to investigator-led clinical trials. Two of those research projects are described below, where researchers are focused on tumor genetics, working to learn how tumors respond to different drugs and attempting to develop novel therapies.

These projects, each currently in a preclinical phase, share the unique phenomenon that they have focused on pediatric cancer from day one unlike other projects, in which adult studies are retrofitted for children. This presents a challenge, because there are no external corporate partners to support the work due to the small market size. Even so, if researchers can be more precise with the right population and the right therapy, the possibility of more robust data exists early on in the process, despite a small trial size.

Developing a Targeted Therapy for Glioblastoma 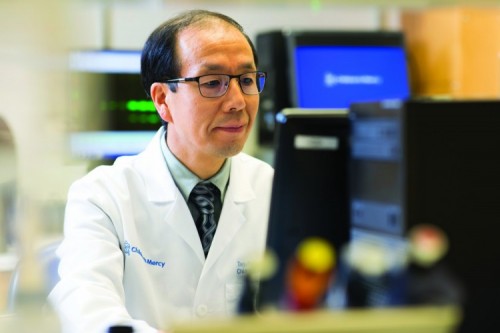 Glioblastoma (GBM) is the most common and most aggressive primary malignant brain tumor, with a very poor prognosis in pediatric patients. After the standard surgery and radiation treatment, recurrence with more aggressive tumors is common. To improve outcomes, Taeju Park, PhD, Children’s Research Institute, is leading a project, funded by the Midwest Cancer Alliance, to develop a novel treatment.

In the lab, he and his team take advantage of genetically engineered mouse models and the gene knockdown technique to study tumorigenic functions of Crk and CrkL. They identified a protein that is activated by elevation of Crk and CrkL and binds to Crk and CrkL. The new malignant connection promotes tumor cell migration and invasion. Dr. Park’s goal is to develop drugs that specifically break down the aberrant protein-protein complex between Crk and CrkL and their binding partners.

To test effects of chemical compounds on the binding of these proteins, Dr. Park developed an in vitro assay system and conducted a high-throughput screen. In partnership with The University of Kansas Cancer Center, the team has tested 200,000 chemical compounds and identified more than 600 potential candidate drugs. Today, these compounds are undergoing rigorous post-screening validation using different biochemical experiments.

Developing a Targeted Therapy for Medulloblastoma and AT/RT 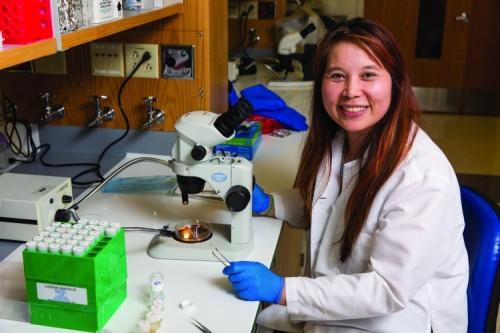 Over the past several years Dr. Ng and coworkers in Dr. Tom Curran’s lab helped develop a new approach to the treatment of MB using Hedgehog (Hh) pathway inhibitors. The lab conducted molecular gene expression studies that identified 4 major subtypes of MB tumors and developed a mouse model (Ptc1/p53 mouse model) for high incidence, early onset, Hh subtype MB. Using this spontaneous central nervous system (CNS) mouse model, they demonstrated that oral delivery of small molecule inhibitors of Smoothened (Smo), called GDC-0449 or vismodegib, eliminated even large spontaneous brain tumors in mice. They worked with Curis Inc., and later Genentech Inc., to demonstrate proof-of-concept of the use of Hh inhibitors in cancer. This work led to successful Phase I and II clinical trials of Smo inhibitors in pediatric and adult MB that recapitulated all the major findings obtained in mice. Because of these efforts, the first Smo inhibitor (Vismodegib) was approved for treatment of advanced basal cell carcinoma in 2012.

The next step is to focus on targeting drug-resistant brain tumors. Dr. Ng will use in vitro high-throughput drug screening in partnership with The University of Kansas Cancer Center to identify potentially effective compounds, as well as non-invasive imaging approaches (such as MRI and CT), drug delivery therapies, next generation sequencing, with the ultimate goal of developing new drugs for clinical trials in pediatric brain cancer.

Dr. Ng’s research is also investigating the role of INI1 (Integrase Interactor 1) or also known as SNF5 or SMARCB1. SNF5 is a key component of the SWI/SNF (switch/sucrose nonfermentable) chromatin remodeling tumor suppressor complex, which is an ATP-dependent nucleosome-remodeling complex that regulates gene transcription in CNS development and tumorigenesis, including the pediatric CNS tumor AT/RT. Dr. Ng has generated the first CNS mouse model for AT/RT, which is quite crucial, because with this model they can now test potential drugs in vivo and investigate the cell of origin to understand the cancer biology of AT/RT.

The Role of Precision Therapeutics

Samples from all cancer patients at Children’s Mercy are sent to the Center for Genomic Medicine for DNA sequencing. These genomes are stored in a central database. When a trial is opened for specific genetic mutations, patients who qualify can quickly be notified. In addition, researchers continue to evaluate these genomes to see if they can uncover anything today using new technologies. This is the future of research at Children’s Mercy.

Learn more about these translational hematology and oncology studies.