Does the Timing of Postnatal Corticosteroid Treatment for BPD Affect Outcomes in Neonates?

Earlier treatment with steroids can potentially modify the disease trajectory and improve outcomes.

Bronchopulmonary dysplasia (BPD) affects more than 40% of preterm infants with birth weights of less than 1,500 grams. Infants with BPD remain at risk for serious morbidities well beyond their discharge from the neonatal intensive care unit (NICU), including increased risk for hospitalization within the first year of life, poor growth, long-term respiratory disease and adverse neurodevelopmental outcomes.

Postnatal steroids are among the few medications shown in randomized trials to be beneficial in alleviating BPD. Because of safety concerns on longterm neurodevelopment, the American Academy of Pediatrics recommends a selective approach to steroid treatment that uses low-dose regimens targeted toward preterm infants at highest risk for developing BPD.1 The optimal timing of steroid treatment, however, is an inadequately studied aspect of this approach that could potentially modify its safety and efficacy.

In the level IV NICU at Children’s Mercy Kansas City, there is wide variability with regard to timing of steroid treatment among preterm infants with evolving BPD. Some clinicians choose to treat infants who remain intubated on moderately high ventilator settings at around 2 to 3 weeks of life. Others opt to delay treatment until the lungs have had more time to mature and additional efforts to wean from mechanical ventilation have been ineffective.

To examine the association between timing of steroid treatment and outcomes in high-risk preterm infants with evolving BPD, Alain Cuna, MD, neonatologist and Children’s Mercy researcher, and his colleagues, conducted a retrospective cohort study of preterm infants treated with low-dose dexamethasone for BPD.

The study, “Timing of Postnatal Corticosteroid Treatment for Bronchopulmonary Dysplasia and Its Effect on Outcomes,” was published in Pediatric Pulmonology.2 Infants treated with dexamethasone at day of life (DOL) 14 to 28 (moderately late group) were compared to infants treated at DOL 29 to 42 (delayed group). Inverse probability of treatment weighting (IPTW) adjusted propensity scores were used to correct for potential confounders. The primary outcome of interest was postmenstrual age (PMA) at discharge.

This research does have important limitations. This was a small, single-center retrospective study that only examined a patient sample from the Children’s Mercy NICU, but it does provide some evidence that seems to support that earlier treatment might be beneficial forthese vulnerable patients.

Fifty-five infants (25 with moderately late treatment; 30 with delayed treatment) were identified for this research.

The mean age at treatment was 23 days in the moderately late group and 35 days in the delayed group. At time of treatment, infants treated moderately late were more likely to be on high-frequency ventilation (96% versus 47%, P < 0.0001) and had a higher fraction of inspired oxygen (71 ± 18% versus 56 ± 18%, P = 0.005) compared to infants treated later. Despite being the sicker group, moderately later treated infants (14 to 28 days) were discharged at an earlier corrected age compared to infants with delayed treatment (29 to 42 days). Earlier treatment was also associated with fewer days on mechanical ventilation and fewer days on supplemental oxygen, as well as less treatment with repeat or rescue steroids. There was also a trend toward more tracheostomy among delayed-treated infants.2 The exact reasons for worse outcomes observed among infants treated later with steroids remain unknown. One possible explanation is that later steroid treatment was less effective than earlier treatment. However, in the study the average time for successful extubation following treatment was similar between the two groups, suggesting that steroids remained equally effective in facilitating extubation whether given earlier or later (Fig). 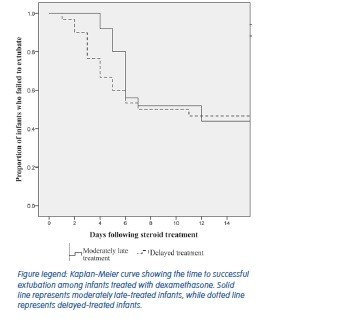 “Our hypothesis is that the more prolonged exposure to mechanical ventilation among later-treated infants contributed to the worse outcomes seen in this group,” Dr. Cuna said. “In the study, the average difference in time to steroid treatment between the moderately late and delayed groups was 12 days, a not insignificant period of time to remain on mechanical ventilation.”

Together, these findings led Dr. Cuna and his colleagues to conclude that among preterm infants, earlier treatment with steroids can potentially modify the disease trajectory and allow for the sicker cohort to have better outcomes compared to delayed treatment.

The research does have limitations since it was a small retrospective study at a single site. However, the paper was in the top 10% of papers downloaded from the Pediatric Pulmonology journal site. This supports our theory that it is a clinically important question with little evidence-based research. Dr. Cuna and his colleagues are seeking to validate their results in a larger patient database. To do so, they are currently utilizing the nationwide database of the Children’s Hospitals Neonatal Consortium, a collaborative of 34 participating level IV NICUs that share data, information and ideas for benchmarking, research and quality improvement initiatives.

They are asking the same questions regarding the timing of corticosteroid treatment and outcomes. This data is currently under analysis. Dr. Cuna anticipates results could be available in the next year, and may provide additional insight and guidance on this important topic. 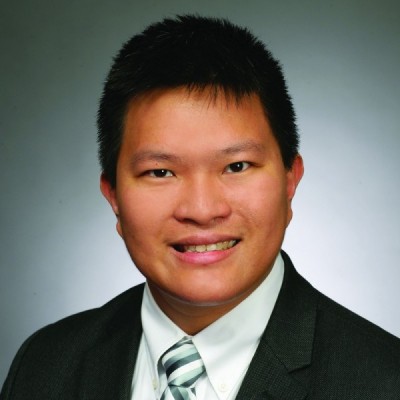 Does the Timing of Postnatal Corticosteroid Treatment for BPD Affect Outcomes in Neonates?