Improving the Diagnosis Rate for DSDs

Differences of sex development (DSDs) are a diverse collection of congenital conditions that result in genital ambiguity or complete sex reversal. The birth of a baby with genital ambiguity is seen as a medical and psychosocial emergency and is a reason for an immediate referral. Unless doctors can determine the underlying genetic variants that caused the condition, they are challenged to offer effective clinical management. Despite an improved understanding of DSDs and the use of contemporary genetic technologies, the nationwide diagnosis rate in undermasculinized males ranges from 17% to 50%.

To improve on this low rate of diagnoses, Jill Jacobson, MD, pediatric endocrinologist at Children’s Mercy Kansas City, led an effort to develop a tiered approach to genetic testing in undermasculinized males who were seen in the multidisciplinary GUIDE Clinic at Children’s Mercy.

Sexual development involves a complex interplay among a variety of hormones, signaling pathways and crosstalk within the hypothalamic-pituitary-gonadal axis, as well as in other target tissues. Estimates suggest that more than a thousand genes are involved in testicular development, and a similar number of genes affect ovarian development. Add in a range of nongenetic causes that influence sexual development, and the diagnostic challenges become clear.

The Importance of Evaluation and Diagnosis

Identifying and managing the underlying cause of ambiguous genitalia is crucial to long-term health. For example, detection of disease-causing variants in NR5A1, NR0B and the multiple genes that cause congenital adrenal hyperplasia could potentially circumvent adrenal crises, including the risk of sudden death. Certain types of cancer, such as Wilms tumor, are affected by variants in WT1. For patients with this variant, periodic screening for malignancy will be necessary. In other patients, the underlying molecular cause could lead to prognostic potential for fertility and the risk of gonadal tumors.

About the GUIDE Clinic

The GUIDE (Gynecology/Genetics/Genomics, Urology, Interdisciplinary, Developmental, Endocrinology) Clinic, which opened in 2008, provides complete care for patients with all forms of differences of genital development from birth to age 21.

Starting with the GUIDE Clinic’s retrospective and prospective data repository, which contains molecular data on every patient seen since the clinic opened in 2008, Dr. Jacobson and the GUIDE team conducted a retrospective chart review to determine how many undermasculinized male patients received a molecular diagnosis. The team has continued to apply stepwise genetic testing to all undermasculinized patients with DSDs who present to the interdisciplinary GUIDE Clinic. External masculinization scores were recorded. Then patients underwent progressive testing:

A total of 60 undermasculinized male patients were seen in the clinic during the study period, from July 2008 to December 2016.

Dr. Jacobson developed an algorithm to support the diagnosis of patients with ambiguous genitalia. To see the algorithm, please visit https://doi.org/10.1210/endocr/bqz015.

The key finding from the study identified:

Of the 46,XY patients who underwent all available genetic testing, 18 of 28 (64%) received molecular diagnoses.

This study finds that 18 of 28 (64%) of undermasculinized 46, XY individuals who underwent all available testing achieved molecular diagnoses.

This percentage is comparable to the diagnosis rate in masculinized females undergoing conventional testing during the same time frame.

The Children’s Mercy GUIDE Clinic diagnosis rate is considerably higher than that reported in the numerous studies on DSD, which nearly always show a diagnosis rate below 50%.

Dr. Jacobson and the GUIDE team outlined the details of their study in a paper that has been accepted for publication by Endocrinology.

Although Dr. Jacobson’s work has already increased the rate of molecular diagnoses, many patients are still left with no diagnosis, leaving them at risk for serious complications. Her team hopes to eventually include whole-genome sequencing through the Children’s Mercy Genomic Medicine Center as a way to further increase diagnosis rates for these patients. 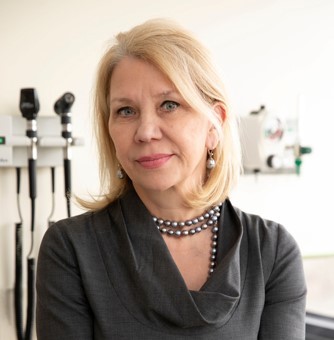 Improving the Diagnosis Rate for DSDs